News
Fotokite wins Techstars Pitching Competition in Las Vegas!
13.01.2017 Fotokite was awarded, among other prizes, $120’000 for winning the Techstars pitching competition at the CES event. 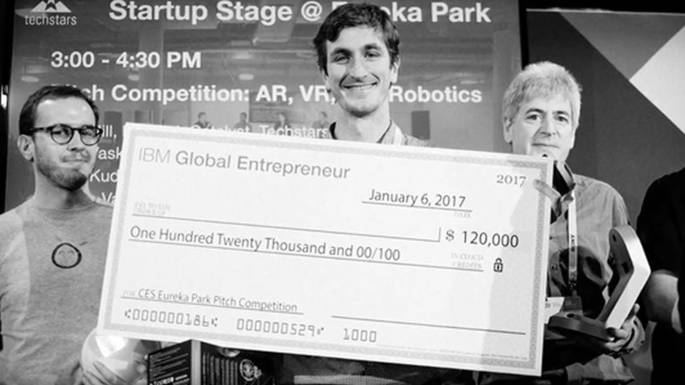 Following their successful crowdfunding campaign, Fotokite launched the consumer-friendly drone, “Fotokite Phi”, in November. Fotokite Phi is a light-weight, tethered and foldable drone that allows anyone to take pictures and videos from the sky using a Go pro camera. Thanks to the physical tether, Fotokite has proven to be more intelligent than an ordinary drone. In addition, it has been approved by safety experts to be a reliable way of capturing aerial perspective.

“The Fotokite Phi gives everybody the power to capture bird’s-eye footage as quickly and easily as possible,” said CEO Chris McCall. “There are a ton of problems with traditional airborne camera systems – lengthy setup time, flyaways, reliability on GPS signals, difficulty flying indoors – and we wanted to solve as many of them as possible. The Phi’s combination of portability, usability and safety makes it the perfect companion for anybody who wants to tell stories from the sky.”

Fotokite wins prize in Las Vegas
The Fotokite has, since its crowdfunding campaign, continued to attract the attention of the public including tech experts from all over the world. Over the weekend, the founders of Fotokite exhibited their product at the Consumer Electronics Show (CES) event – one of the largest events showcasing consumer technologies – and also participated in the Techstars pitching competition. Having convinced the jury in their 60-seconds pitch, Fotokite was announced the award winner of the category VR and Robotics. The founder was awarded a cash prize of $120’000 from IBM Global Entrepreneur and two additional prizes. This year, the Techstars pitching competition took place for the fourth consecutive year at CES.

About Techstars
Techstars is a global accelerator empowering entrepreneurs to bring new technologies to market wherever they choose to live. With dozens of mentorship-driven accelerator programs and thousands of startup programs worldwide, Techstars exists to support the world’s most promising entrepreneurs throughout their lifelong journey, from inspiration to IPO.

About CES
CES is a global event connecting innovators with breakthrough technologies. Owned and produced by the Consumer Technology Association (CTA), the technology trade association representing the $287 billion U.S. consumer technology industry, it attracts the world’s business leaders and pioneering thinkers.
CES 2017 showcased the connected future of technology. With more than 3,800 exhibiting companies and exhibit space of more than 2.6 million net square feet, CES 2017 was a record-breaker, welcoming the world’s biggest companies in addition to hosting more than 600 startups at the Eureka Park Marketplace. More than 175,000 industry professionals, including 55,000 from outside the U.S., convened in Las Vegas to drive the ever-evolving global technology industry forward.