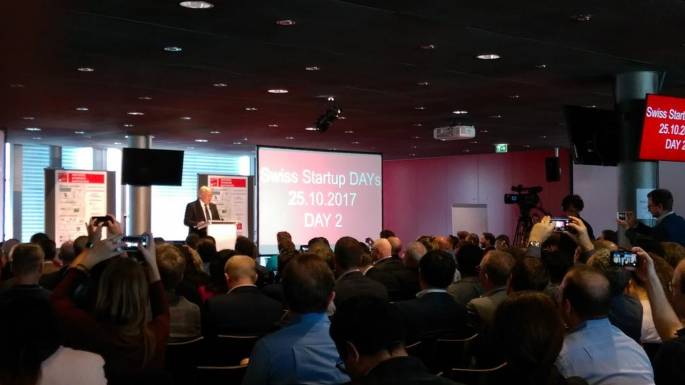 For the first time Swiss Startup Days were hosted on two full days. The new concept by Swiss Startup Invest has proved to be a success. It led to a record number of more than 750 attendees and more than 1150 one to one meetings. 250 of those meetings took place on the first day alone. However not only the large number of participants shaped the event. For the second time in a row Federal Councillor Schneider-Ammann delivered a key note and the atmosphere at the event was different than in the last years. It was reminiscent of a young company in the first strong growth phase. Of course there is a lot of work to be done and of course the marketing has to be improved, but basically it is moving at high speed in the right direction. Accordingly, the mood is positive and the players are motivated to work on the tasks at hand.

And there is plenty to getting on with. One important topic for the startup scene is the regulatory framework which was addressed by Federal Councillor Schneider-Ammann in his keynote. He had three main messages:

Schneider Ammann’s talk was followed by a keynote by Trudi Haemmerli, Member of the Board of Innosuisse. She provided interesting insight into the transition from CTI to Innosuisse and highlighted the relevant changes for start-ups.

Other highlights of the event included the investors on stage. The session with about 30 investors informed the start-ups about funding opportunities and incidentally also about their capabilities on stage.

Apart from the investors, 57 start-ups pitched during the event. 40 of them were selected in two “Elevator Pitch” competitions in Basel and Zurich out of more than 150 applicants. They were joined by 17 companies from the Kickstart Accelerators. Nine companies made it to the finals: