News
Fotokite wins $1M in New York!
11.04.2018 Fotokite received the top prize of $1 million at GENIUS NY, the world’s largest business competition for unmanned systems in Syracuse, New York. The startup will use the funds to accelerate its growth and expansion in USA. 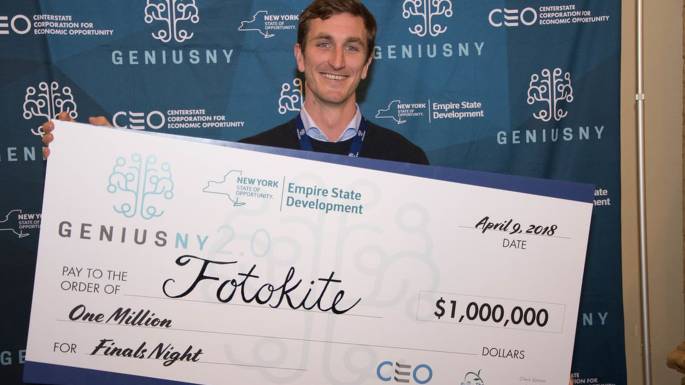 GENIUS NY is a yearlong state-funded competition and business accelerator for startups specialising in unmanned aerial systems. In its second edition, the accelerator awarded six finalist a total of $2.75 million, including prizes and investments of $1 million, $600,000, $400,000 and three $250,000 awards for the completion of the first phase of the program. Participants are required to operate their business in Central New York for at least one year.

“GENIUS NY II continues to build on the success of the first round of this ground-breaking competition,” Governor Andrew M. Cuomo said. “By committing to creating a comprehensive network for innovative UAS companies in Central New York, we continue to grow Central New York into a centralized hub for innovation to grow the region’s economy for years to come.”

Fotokite received the first prize of $1 million. Fotokite combines aerial and ground-based robotics with patented flight control algorithms to create a kite-like tethered drone system. The drone system actively uses the tether to fly for 24-hours fully autonomously while delivering an aerial data livestream to the ground. Fotokite has already obtained the FAA approval to commercialise its drone in cities in the USA.

Fotokite is adding a new application to provide firefighters and fire departments with a live aerial situational awareness tool to help them while on duty. For this, the startup has already signed a contract with a large fire-truck manufacturer in the US. Furthermore, Fotokite is planning to expand its sales and business-development team to New York while its team in Switzerland continues to focus on research and development.

The GENIUS NY investment will additionally support the startup in realizing the expansion.

Chris McCall, CEO of Fotokite, said, “This is tremendous support from the GENIUS NY program and CenterState CEO and a total game changer for Fotokite. We are excited to be expanding operations here to support our customers in moving forward. We will work hard to continue building on this early momentum. The other teams in the program have been great and there are opportunities to work with them in the next phase of the GENIUS NY program.”